Perpetually Pretty’s 06 colt was very healthy and normal at birth, but, at 10 days of age, his owner, John and Bonnie Ball, found him down and non-responsive in the pasture. Dr. Katzman paid an emergency visit right away, recognized the severity of his illness and quickly referred him to the hospital. Upon arrival, he had a very low heart rate, severe hypoglycemia (extremely low blood sugar), acidemia (acid build up in his blood), and hypovolemic shock (decreased blood volume). He also had seriously elevated liver enzymes, indicating active destruction/damage to his liver tissues. An ultrasound of his liver showed marked enlargement with an abnormal pattern to his liver indicating swelling/edema of his liver.

All of these findings made Dr. Fielding suspicious for Tyzzer’s disease, a liver infection that affects foals in their first month of life. These foals are often found dead before any signs are noticed with the diagnosis made on autopsy. There are only a few reports of successful treatment for this disease. Based on his suspicions and clinical findings, the colt was started immediately on fluid resuscitation, intravenous glucose, and a continuous infusion of a potent antibiotic. He had severely traumatized his eyes by thrashing on the ground before he became unconscious; medical treatment was instituted for his eyes (topical antibiotics, pain medication, etc.)

The colt became responsive once his blood parameters were corrected. He began to show interest in nursing and interacting with his mother. He was supported with continuous IV treatment for several days until his liver had time to heal and start to function normally.

He was discharged to his owners with antibiotics to continue fighting the liver infection and with long term treatment for the ulcerations on his eyes. Dr. Morgan performed multiple recheck examinations of the colt over the next few months and has now given him a clean bill of health without any detectable long term effects. Due to the close attention paid by his owners, the quick action of all veterinarians involved, and the long-term diligent care given, he is now a happy, healthy, very lucky weanling colt. 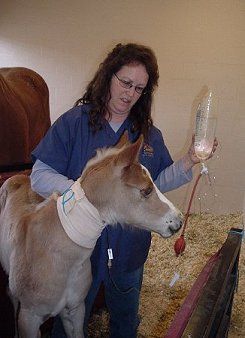