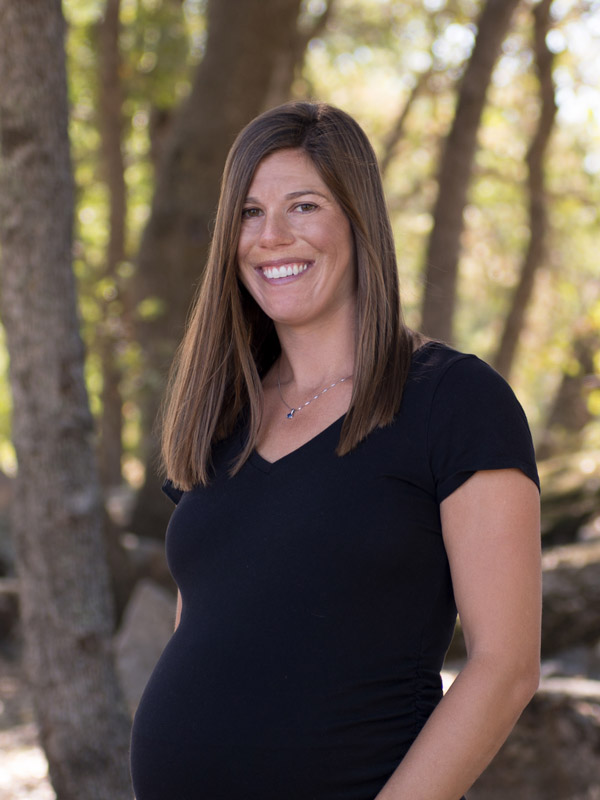 Rattlesnakes are a huge concern for horseback riders in the Auburn/Grass Valley area and in much of Northern and Southern California. We receive calls from concerned riders almost weekly during the late spring, summer, and early fall months, and every year we treat several patients who have been bitten by rattlesnakes. The following article will help answer some of the questions horse owners hav e about rattlesnake bites. It also provides some information on what you, as a horse owner, can do for your horse if he/she is bitten, and it explains what veterinarians do to treat horses with rattlesnake bites.

The Northern Pacific Rattlesnake is the species of rattlesnake that inhabits much of Northern California, including the Auburn area. They belong to a group of venomous snakes known as pit vipers, which are estimated to bite several hundred horses per year in the U.S. Approximately 90% of these snake bites occur in the months between April and October. This is also the time of year that rattlesnakes are the most venomous.

Northern Pacific Rattlesnakes have a broad, triangular head with a narrow neck, cat-shaped eyes, folding fangs, and they may or may not have rattles at the end of their tail. They are capable of striking up to one half of their body length. They are most commonly found hiding under rocks or logs when the outside temperatures approach 100°F. When temperatures are a little cooler, especially during the morning and late evening hours, you may encounter these snakes moving across the trail or slithering through some deep grass. Rattlesnakes are the most inactive when temperatures are around 50°F. They are generally inactive or hibernate from November through February. 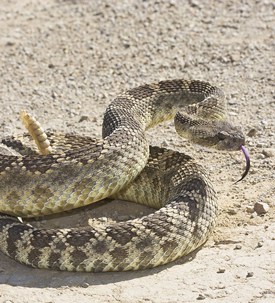 When a rattlesnake bites it does not always release its venom. In fact 20-30% of human and animal bites are “dry bites,” that is, venom is not released. When a snake does release venom, the amount that gets released varies with the size of the snake (larger snakes release larger volumes), however the potency of the venom varies with age, nutritional status, and time of year. Young snakes may release a smaller volume of venom than an adult, but the venom may contain more toxic elements. 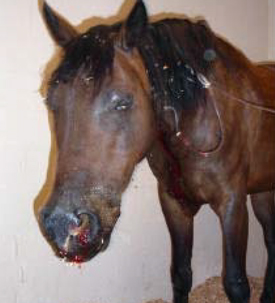 The majority of rattlesnakes in California, including the Northern Pacific Rattlesnake, have venom containing hemotoxic elements. These elements destroy red blood cells, skin tissue, and cause severe localized swelling and internal bleeding. Baby rattlesnakes may also release a neurotoxin making them extremely dangerous. When a rattlesnake injects venom into its victim, the venom initially causes rapid local swelling and edema that can become quite severe in magnitude. Unfortunately, a large majority of snake bites in horses occur on the muzzle, which causes severe local swelling and makes airflow through the upper airways extremely difficult.

Other clinical signs that may be observed include fever, elevated heart rate and respiratory rate, difficulty breathing, and hemorrhage from the nostrils.

Fang marks may not always be identifiable.

What can you do for your horse if they get bitten?

The most important thing that should be done if a horse is bitten on the muzzle is establish a means for the horse to breath once the swelling and edema begin to occur. One way this can be done, especially while out on a trail ride, is to bring along two precut pieces of garden hosing. The pieces need to be long enough to reach the back of the nostrils. If a horse is bitten, you may carefully pass a piece of hosing through each.

If a horse is bitten on another location of the body, such as the lower limb, you may gently rinse or clean the bite wound with soap and water. Do not apply a tourniquet, and do not attempt to suck out/remove the venom.

Another thing you may do if your horse is bitten is administer a full dose of oral Banamine. A 1000 pound horse may receive a full 1000 pound dose of Banamine by mouth immediately. This will help with the inflammation that occurs secondary
to the venom.

It is important to keep the horse (and yourself) as calm and quiet as possible. If you are out on a trail ride do not race back to the trailer, as this will cause great distress to the horse. Ideally, you should hand-walk the horse back to the trailer and call a veterinarian immediately. All rattlesnake bites are an emergency, so it is extremely important that you contact a veterinarian immediately if you know or suspect that your horse has been bitten. 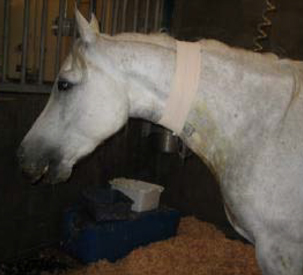 How do veterinarians treat rattlesnake bites?

The treatment for equine rattlesnake bites mostly involves supportive care and close monitoring. Establishing and maintaining an airway is the first and most important component of treatment in horses. There are a couple of options for accomplishing this. The first option is inserting a nasal stent to prevent closure of the nasal passages. This procedure involves inserting tubing into each nostril and suturing them in place or allowing the swelling to hold them in place. The other option for maintaining an airway is by inserting a tracheostomy tube. This procedure involves making an incision into the trachea about 1/3 of the way down the neck. Once an incision is made, a metal device, called a Dyson, is inserted through the incision, forming a circular opening in the neck. This allows the horse to breath air directly through the tracheostomy, bypassing the swollen nasal passages.

The next component of rattlesnake bite treatment involves bloodwork evaluation. Blood clotting times and quantity of red blood cells and platelets are evaluated to allow the veterinarian to decide whether the horse requires a blood transfusion. Rattlesnake venom interferes with the blood’s ability to clot, and the severity of the effects of the venom varies greatly with every horse. Veterinarians also look at white blood cell values to determine the severity of inflammation that is occurring. Blood cell counts and chemistry values may also be evaluated to determine the type of fluids and supportive therapy that is required.

Anti-inflammatories and antibiotics are also routinely administered to equine rattlesnake bite patients. Intravenous Banamine, a non-steroidal anti-inflammatory, is administered to decrease overall inflammation caused by the venom. Systemic antibiotics, such as Gentamicin, Naxcel, Penicillin, or combinations of these antibiotics, are administered as preventative therapy. Rattlesnake saliva contains very high numbers of bacteria, so the antibiotics are also used to prevent infection from the saliva. Patients are also given a tetanus toxoid booster if they have not received one within the past 6 months. Wound care is also a very important component of rattlesnake bite treatment.

Anti-venin administration is another treatment that is commonly offered by equine veterinarians. There are currently no scientific reports of its administration to horses, however there is scientific evidence that supports the benefit of anti-venin administration in people up to 24 hours after the bite. Many equine veterinarians have administered anti-venin to their patients without significant complications, and its use is recommended in many equine medicine textbooks. Currently, a polyvalent anti-venin is marketed to veterinarians. It is very commonly used in canine and feline patients and is often used in equine patients as well. Currently, approximately 5 vials of anti-venin per horse are recommended, however this number varies with the size of the horse, the reaction of the animal, and the amount of venom that is injected. One vial costs approximately $200-$300, therefore its use may be much more practical for foal and miniature horse patients. Because there is a significant mortality rate in horses with rattlesnake bites, anti-venin administration should always be considered.

A new anti-venin, called Cro-Fab, has recently been marketed that has better tissue penetration and is less often associated with anaphylactic reactions. This new antivenin is quite expensive, costing approximately $600 per vial. There is no current information on the use of this drug in horses.

Other treatments for equine rattlesnake patients include supportive therapy and frequent monitoring. Supportive therapy involves keeping the horse adequately hydrated and maintaining proper nutrition. Most horses that are bitten on the muzzle have a lot of trouble picking up hay and chewing it. These patients require softened pellets and mashes, and handfeeding of moistened grass/hay. Other more critically affected patients may require intravenous fluid therapy, blood transfusions, and sometimes intravenous nutrition. These patients also require frequent bloodwork analysis to monitor their response to these therapies. 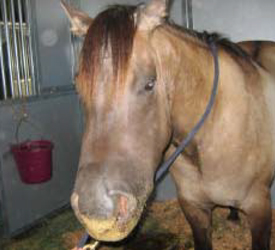 Most horses that are admitted to the hospital early require only airway and hydration/nutritional support. These horses will show signs of improvement within 24 hours of initiation of therapy and have a good prognosis for full recovery. Those horses with severe blood loss and clotting and cardiovascular abnormalities, require much more aggressive treatment and have a guarded prognosis for recovery.

Is there a rattlesnake vaccine available for horses?

There currently is no rattlesnake vaccine marketed for use in horses, although work is being done to develop one. Red Rock Biologics recently developed a vaccine against the Western Diamondback Rattlesnake venom, and it has been approved by the USDA for use in dogs. This vaccine works best against the Western Diamondback, however the venom from many other species of rattlesnake found in the U.S. have very similar venom to the Western Diamondback. Therefore, this vaccine also provides some protection against these other species of rattlesnake, including the Northern Pacific Rattlesnake found here in Northern California. When administered to dogs, the vaccine stimulates the production of antibodies against the rattlesnake venom. These protective antibodies immediately neutralize the venom when the animal is bitten. Veterinarians typically report less swelling, less tissue damage, and faster recovery from snakebites than those who are not vaccinated. All vaccinated dogs bitten by rattlesnakes still must seek immediate veterinary attention, and they do require treatment. This vaccine currently is not recommended by veterinarians at UC Davis, as its efficacy is still under question.

Red Rock Biologics is also the company that is currently working on the rattlesnake vaccine for use in horses. There currently is very little information available on the equine rattlesnake vaccine. If you would like to learn more about the vaccine in dogs, you can visit their website at www.redrockbiologics.com