A blind mare gives birth to her “Prime Time” foal.

Newborn foals sometimes require treatment. The joy and excitement of a new foal in the barn can quickly turn to stress and worry for all those involved. But, the challenges are even greater when the mare is blind. Felica, a sixteen-year-old Hanoverian mare is a valuable mare in her owner’s breeding program. After uveitis took her sight in one eye and glaucoma in the other, her owners decided it was still possible to breed their blind mare. Her foal arrived mid-afternoon right when he was due, earning him the name Prime Time.

“Once the mare had foaled we knew we had a challenge with the foal’s ability to stand on his own due to laxity in his hind limbs,” says Sandy his owner. The mare also wanted to stand right over the top of her new foal forcing the owners to stay with the pair around the clock to help the baby stand to nurse and protect him from the blind mare. Within a day, it was apparent he wasn’t properly passing his first stools, called meconium, and straining to urinate. They called out the ambulatory team from Loomis Basin Equine to begin treatment in the field. 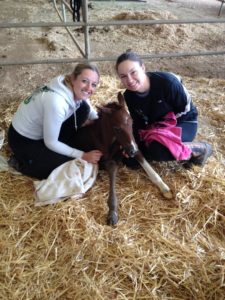 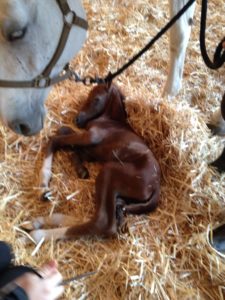 By the next morning, when the colt had not passed any feces and had a distended abdomen he was referred to the clinic. “I thought they must be filled with dread having to take on a large, blind mare with her foal away from home in a hospital setting,” Sandy admits. But, the clinic is prepared for such situations.

The mare and foal were received into the neonatal intensive care facility. Prime Time had his own six-foot by five-foot box with a padded floor and sides three and a half feet high over which Felicia, the mare could nuzzle her foal. In his box, the foal could be extensively treated. Through their five day stay, he was catheterized, given intravenous fluids, nutrition, and plasma. Once the meconium impaction had passed, he was gradually reintroduced to nursing. Felicia had tolerated her situation well, even allowing the staff to continue to milk her. Despite being blind, the mare did very well throughout her stay remaining calm and content. Her colt also showed improvement in the laxity of his hind limb tendons. 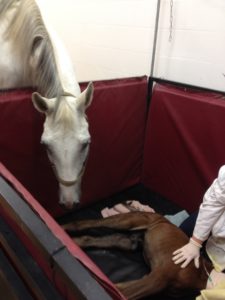 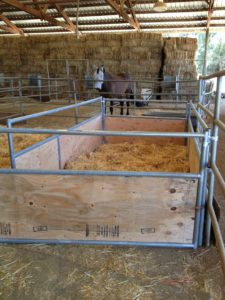 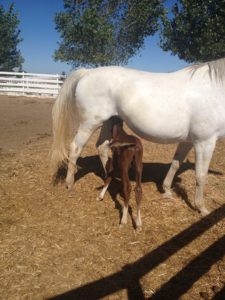 It was time to continue the care at home. Sandy built a similar stall separating the foal in a railed box in the stall with his mother. “We could leave them alone and know she wouldn’t step on the baby,” explains Sandy. It facilitated their continued regimen of medicating, and cleaning his umbilical stump. Although he continued to improve, the colt was still at risk for complications and infections. “Unfortunately, the mare did not get the concept of allowing the baby to nurse through the rails of his little box. So, we had to stay on a schedule to supervise his nursing,” Sandy adds. Another adjustment was in the works. “We moved the pair into our indoor arena. With more space, she would stay a safe distance from the colt when he was laying down. We tied a bell to the baby so she could get used to his movements and feel confident where he was.”

Eventually, the pair moved to an outdoor corral, then a pasture. When it was time to wean, Sandy says the foal quickly took to his new companions, but the mare did not like the separation. “I think having a foal was the happiest time for her since going blind. She was not alone and the bond with the foal didn’t require sight to feel his company,” Sandy says adding that they intend to breed the mare again hoping for a less complicated start, but with a toolbox of strategies and the ready help of the staff and doctors at Loomis Basin Equine Medical Center.