It was a cold December morning when our ambulatory service was called out to see a newborn foal that was having trouble rising and had not been visualized nursing. On arrival Dixie, a maiden Tennessee Walker mare, was anxiously trying to tend to her new palomino filly that was born sometime in the early morning outside unobserved. On physical exam, the filly had a strong suckle reflex but she appeared generally weak, hypothermic, and unable to stand without assistance. Due to her lack of colostrum intake, progressive weakness, and risk of infection the owners elected to bring her to the hospital for treatment and further testing.

On arrival at the hospital, a complete blood panel was performed, which showed a very low blood glucose concentration as well as high muscle enzyme levels. An intravenous catheter and a feeding tube were placed to supply her with nutrition, fluids, and antibiotics. Intensive, round the clock supportive nursing care was a key factor in helping Dixie’s filly regain her strength. The foal’s blood selenium concentration was tested due to her increased muscle enzymes and found to be very low.

White muscle disease, which is caused by selenium deficiency, can be seen in all ages of horses. The most profound effects are often seen in newborn foals who will show extreme weakness. One of the keys to treating selenium-deficient foals is to give them injectable Selenium in order to rapidly and effectively boost their selenium levels. It is also important to address the dietary supplementation of both the mare and the foal. Follow up monitoring of their selenium levels is important in young foals, as they may need additional injectable selenium supplementation. In areas where soils are deficient in selenium (which is the majority of Northern California), hay can be tested to check for adequate levels, and feed supplements are available to make up for inadequate hay levels.

Dixie’s filly has done very well at home and she continues to grow and thrive. She has now graduated to daily turnout with Dixie and is enjoying being a regular rambunctious foal. All of the horses on the property are now being supplemented to avoid any further problems with selenium deficiency. In general, selenium deficiency can cause chronic muscle problems, decreased immune function, pregnancy loss, etc. If you have any concerns about your horses, a simple and inexpensive blood test can determine their current level and if they require supplementation. Selenium can be a problem if over-supplemented as well, so please contact us if you have any questions regarding proper supplementation.

Dr. Fielding assists a weak foal into the clinic 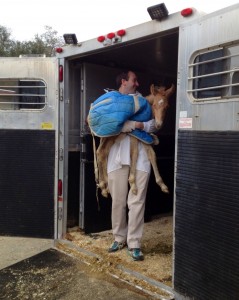 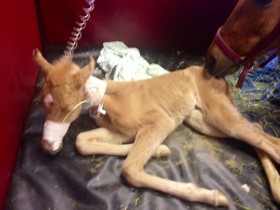 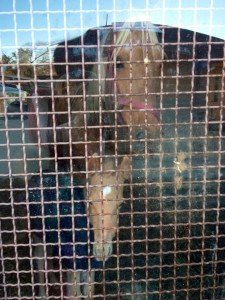 One week after arrival - all dressed up and ready to go home! 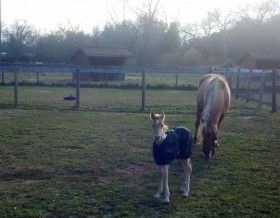 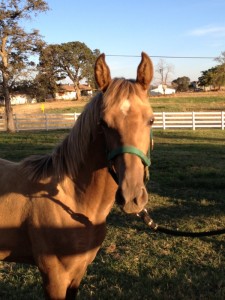 She's all grown up! 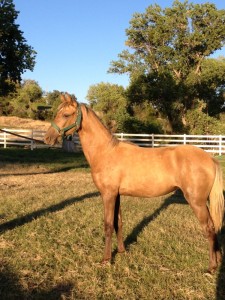